There is a video of Prof. Georg Polya, giving a lecture to a group of students. Polya was a mathematics professor at Stanford, known best perhaps for his seminal work on problem solving called “How To Solve It”. In the 60’s, the Mathematical Association of America filmed a lecture of his on the role that guessing plays in mathematics.

It is worthwhile watching the video (linked to above). Polya is very charming and gives a good lecture.  Unfortunately, the lecture tends to get misinterpreted.

In the past, I have offered criticism of the trend in math ed to give students a type of problem called the “growing tile” problem. Students as young as fifth graders are given these type of problems in which they attempt to find the pattern that describes the sequence of a growing number of tiles or dots. These types of problems are given supposedly to develop the “habit of mind” to see a pattern and then to represent it mathematically.

Such problems are reliant on intuition — i.e., the student must be able to recognize a mathematical pattern using inductive reasoning. There is nothing wrong with inductive reasoning, or guessing what a pattern is. In fact, as Polya points out, it is an essential part of solving problems in mathematics. He poses a problem in his lecture and asks his students to guess what the next number (in this case, the number of spaces created by a specific number of planes). He then, at about 25:50 in the video, asks his students if the guesses they have generated prove anything. The answer from the students, and echoed by Polya, is “No.” He goes on to say “Don’t believe in all your guesses.”  And in fact, the problem he poses in the video does not conform to the pattern of guesses that seems so apparent.

This is the part that sometimes gets left out of the “habit of mind” and “growing tiles” approach that is popular in various math programs (CPM being one of many) and advocated by Jo Boaler and others. While some  problems conform to the inductive conjectures that students produce, other problems such as  Polya’s do not. For example, this problem, taken from Moise-Downs “Geometry” textbook, is from a set of problems to reinforce the idea that intuition often does not coincide with deductive reasoning. 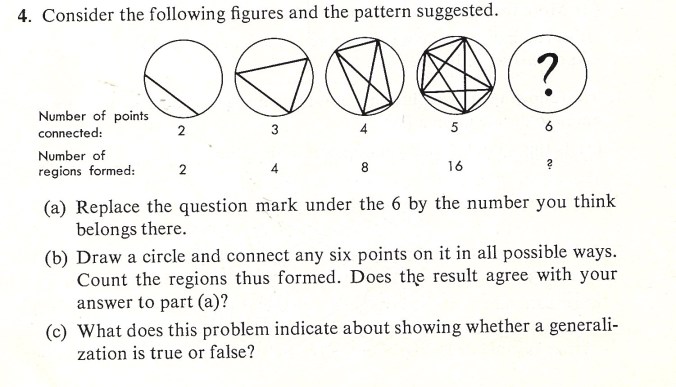 Presenting growing tile problems in early grades is more of an IQ test than fostering any kind of mathematical thinking. But more important than that is the unintended habit of mind that springs from such inductive type reasoning. Specifically, students learn the habit of jumping to conclusions based on inductive responses. This develops a habit of mind in which once a person thinks they have the pattern, then there is nothing further to be done. Such thinking becomes a hindrance later when working on more complex problems.

Polya’s lecture has become a kind of poster child for this type of “math is about patterns” type of thinking. Polya says guessing and patterns are important for sure; he devotes a whole lecture to this topic. But he also says you ultimately have to prove your guess.  That’s  the part that doesn’t get played up too much by the “math is all about patterns” crowd.

6 thoughts on “Guesses, Induction and Math is All About Patterns, Dept.”

Math Education in the US: Still Crazy After All These Years

Math Education in the US: Still Crazy After All These Years